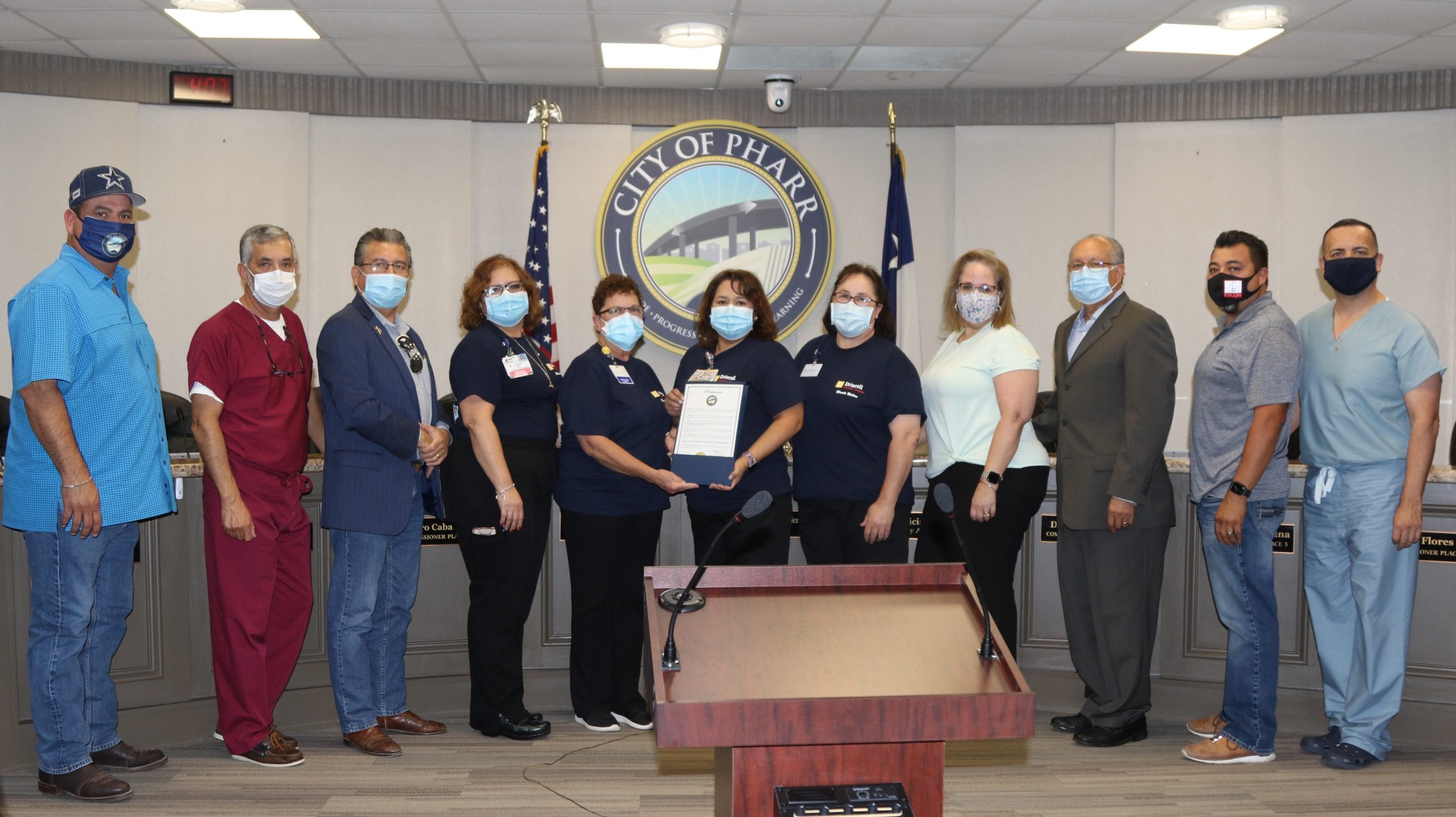 City Commissioner Dr. Ramiro Caballero read a proclamation by Mayor Ambrosio Hernandez, M.D. declaring the month of July 2020 as Cleft and Craniofacial Awareness & Prevention Month in Pharr. This month brings awareness to orofacial clefts, which are the most frequently occurring birth defects in the United States, affecting approximately 7,000 babies annually, according to the Centers for Disease Control and Prevention (CDC). In attendance at the meeting and to accept the proclamation were members of the Driscoll Children’s Craniofacial and Cleft Center. Mayor Hernandez recognized the members, thanking them for the work they do to provide comprehensive care, information, support, and access to interdisciplinary teams for children and families affected by craniofacial differences. 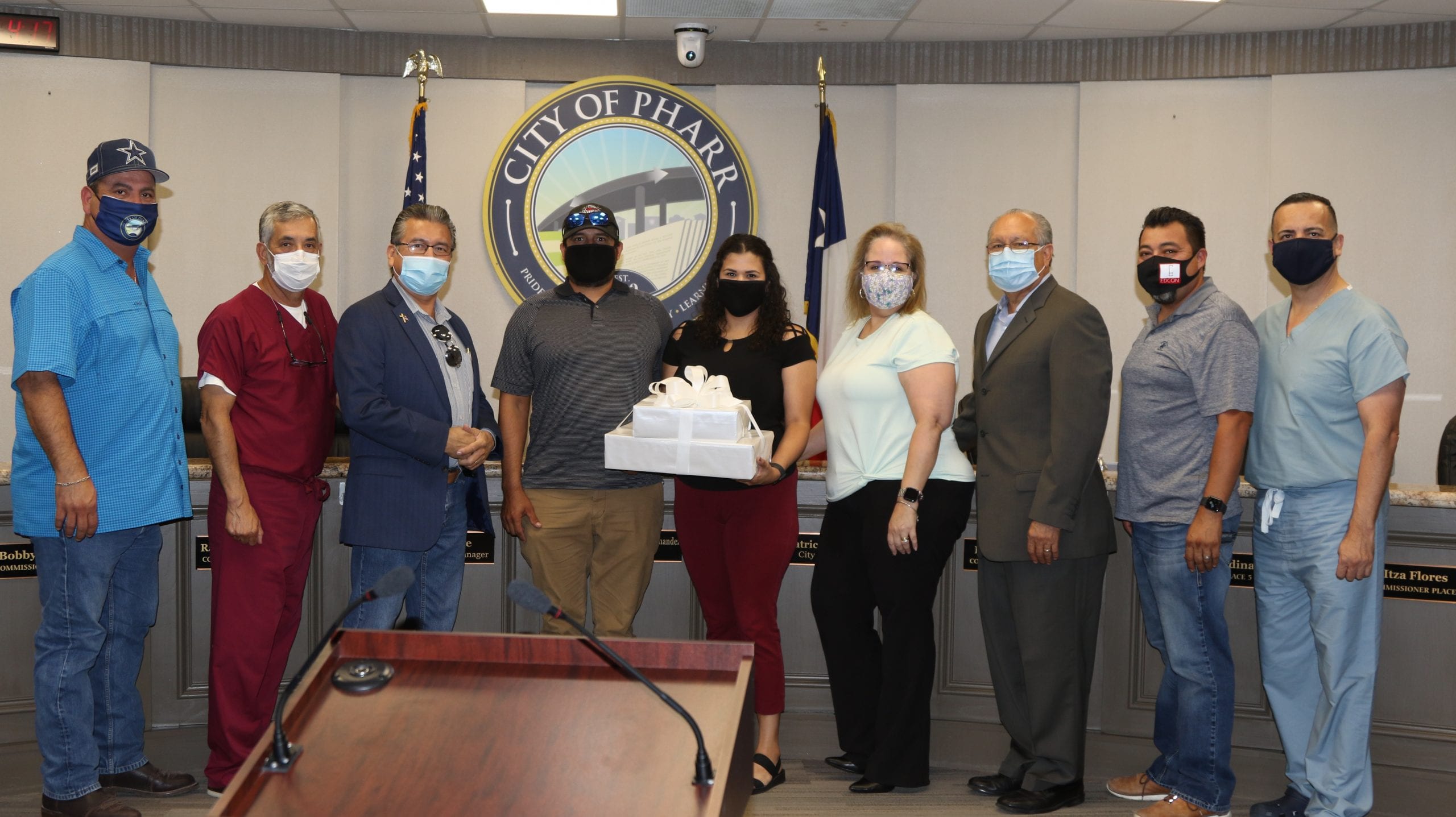 Mayor Ambrosio Hernandez, M.D., recognized Hector and Deborah Cruz at the podium to introduce them and share their story with the rest of the members of the City Commission and the public. Hector and Deborah recently tied the knot and exchanged their marriage vows at Pharr’s brand-new wedding destination attraction – the Pharr Downtown Park! The Cruzes are the first couple to have held their nuptials at one of Pharr’s newest and attractive public outdoor spaces. Complete with a beautiful water fountain and amphitheater seating area, it set the stage and setting for a perfect wedding. Congratulations to the Cruzes on the start of their beautiful life together, and we thank you for sharing your special moment with the City of Pharr! To commemorate the occasion, the couple were gifted wedding presents from the Pharr City Commission. Mayor Hernandez thanked the couple for sharing their moment with the City Commission. Hernandez stated, “Congratulations on your union. Be very patient. You got in this because of love, and no matter what happens, stay strong. Best of luck to you guys,” he added.

The City Commission considered an ordinance appointing a municipal judge and alternate municipal judge for the City of Pharr. Commissioner Bobby Carrillo made a motion to appoint Criselda Rincon Flores as Municipal Judge and Rudy Martinez as the sole Alternate Municipal Judge, seeing that the court has seen a decrease in cases; the appointments were unanimously approved.

The City Commission approved an Interlocal Agreement between the City of Pharr, the City of San Juan, the City of Alamo, and the Pharr-San Juan-Alamo Independent School District for the PSJA Tri-City Pedestrian Safety Improvements Project Phase I. Interim City Manager Ed Wylie explained that the City of Pharr is taking the lead on the project, which will install safe sidewalks at locations selected by PSJA ISD near schools across the tri-city area. The total financial commitment estimated for the City of Pharr is $315,823.96.

Interim City Manager informed the members of the City Commission that the city received bids for the Pharr City Hall 1st Floor Renovation Project. The construction budget is $2.349 million, and the anticipated time period is 207 days. Staff recommended awarding the project to the highest-scoring proposal submitted by NM Contracting out of McAllen; the city commission approved unanimously.