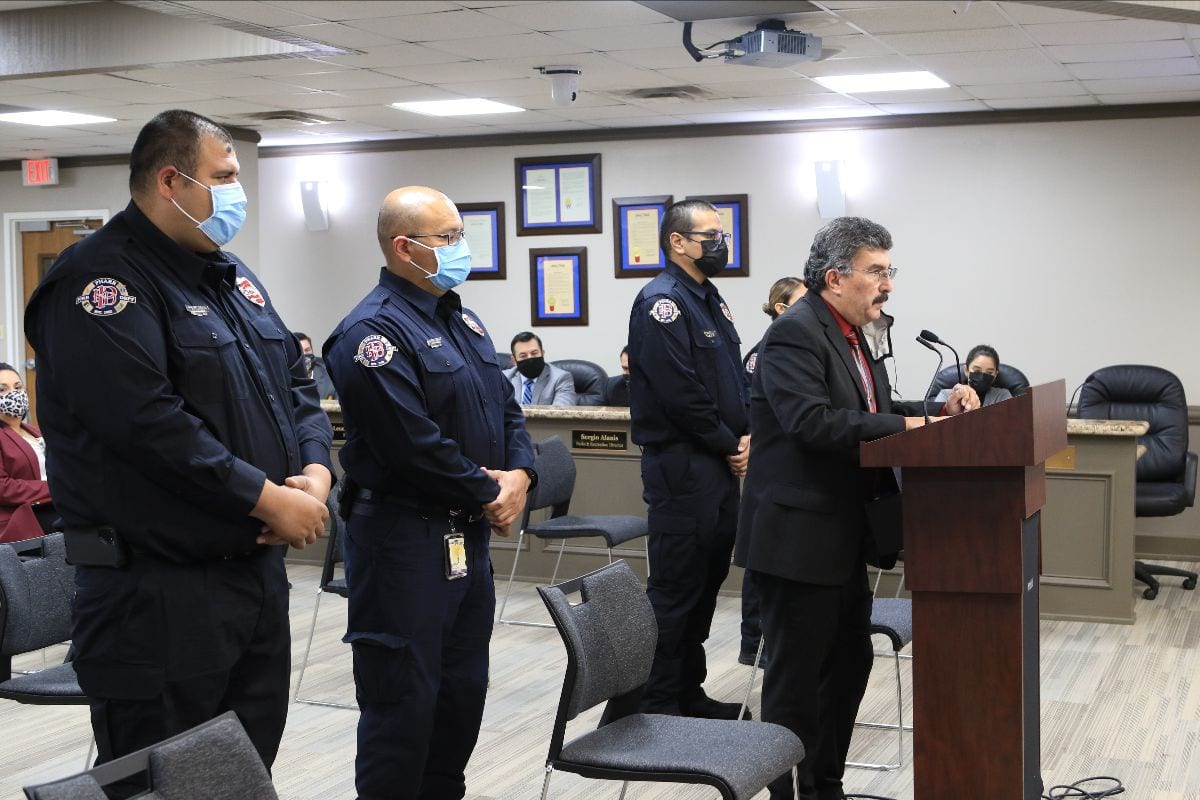 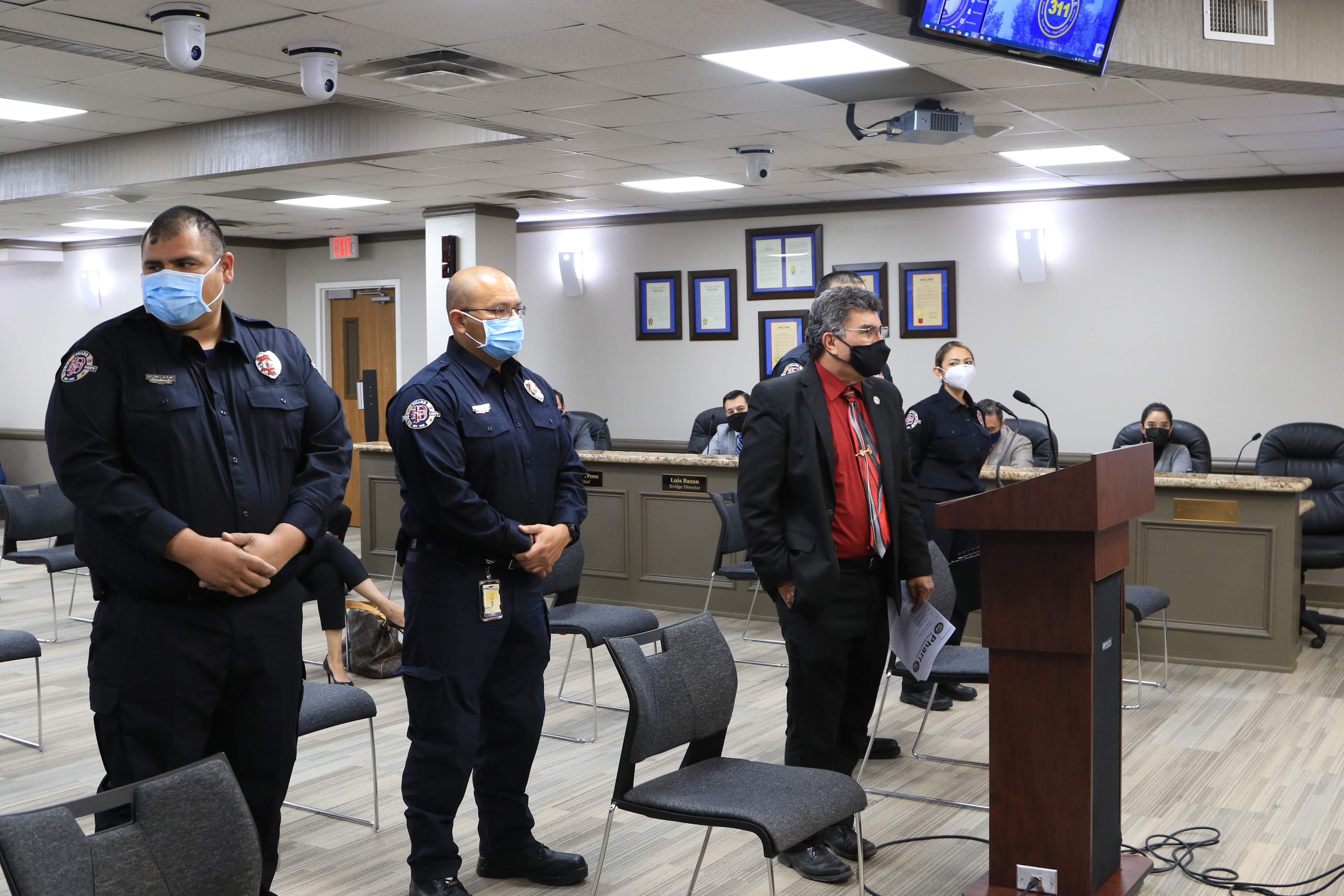 Mayor Ambrosio Hernandez, M.D. and the Pharr City Commission recognized six first responders from the city for their efforts in assisting the State of Texas Emergency Management Taskforce in their efforts against COVID-19 in El Paso. The team answered the request made by the Texas Department of State Health Services and the Texas Division of Emergency Management to assist with response efforts in El Paso. They joined first responders from throughout the state with medical personnel and equipment to address the surge of COVID-19 cases. Pharr Fire Chief Leonardo Perez introduced the responders during the city meeting, they are Engineer Juan F. Martinez, Volunteer Firefighter David Gonzalez Jr., Moises Arellanta, Volunteer Firefighter Alicia Cano, Firefighter Hector Garcia, and Volunteer Firefighter Richar Garcia. “All these six people did an excellent job of representing our city in El Paso and assisting their respective teams with Covid response efforts,” said Chief Perez. “I did receive letters from state officials and a phone call from Bernardino Palacios the Program Director of the EMPF and John Phillips the regional coordinator praising our people for their service out there,” added Perez. “Thank you ladies and gentlemen for your great work, I know you put your lives at risk out there every single day and we are appreciative of the great work you did in assisting the City of El Paso,” said Mayor Hernandez.

Pharr City Commissioners approved a Resolution authorizing the City Manager to submit and execute a grant application to the Federal Emergency Management Agency (FEMA) for grant funding under the FY2021 Building Resilient Infrastructure & Communities (BRIC) program. Funding is being sought from FEMA in the amount of $8,542,500 (75%) for the Southeast Pharr Drainage Mitigation Project Phase I. The proposed project comes from the Master Drainage Plan and is estimated to cost a total of $11,390,000. The remaining balance of $2,847,500 (25%) is to be paid with local funds.

The City of Pharr has been proactive in identifying areas of concern throughout the city as they continue to seek funding for their Drainage Master Plan. “Over the last few years, we have been working to bring our drainage system up to par,” said Mayor Hernandez “We are investing a significant amount of money to ensure that we have an effective and safe system that works for our residents,” added Hernandez. He went on to identify the area of Sugar Road and Egley Road as a significant concern being that when the subdivision was developed, it was built with no inlets, which means that water has nowhere to go. City Engineer Omar Anzaldua also said his department has identified several issues at Sugar Road which will be addressed. Mayor Hernandez also added that the city is working with PSJA ISD to address drainage issues.

The City of Pharr will be building on the existing Hike and Bike Trail that the county has done. As announced by City Manager Ed Wylie during the city meeting, Pharr plans to expand the trail by nine miles starting south of I Road all the way to Military Road and east to Santa Ana. Commissioner approved the City Manager to negotiate and enter into a contract with GDJ Engineering, from the list of qualified firms, for the Design of the Veterans Rd./Hike & Bike Expansion Project.

Pharr Commissioners approved a second amendment to the CARES Act Interlocal Cooperation Agreement with the County of Hidalgo. “Through the initial agreement, we were allotted $114 per person which totaled $7 million dollars for the City of Pharr for COVID-related expenses from the federal government through the county,” said City Manager Ed Wylie. “This interlocal will allow us to tap into the remaining $18 dollars, which brings us up to $134 per person, an additional $5 million in funding for the City of Pharr,” added Wylie. 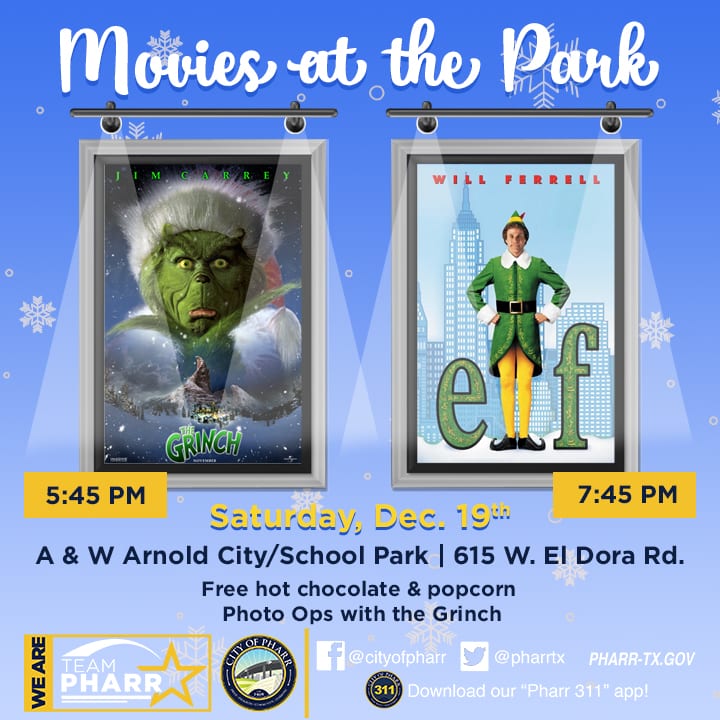 Join us for Movies at the Park on Saturday, December 19, 2020, at 5:45 pm at A&W Arnold City/School Park (615 W. Eldora Rd.). There will be a special double feature with holiday favorites The Grinch and Elf both playing.

We will have FREE hot chocolate and popcorn for families and even a photo opportunity with characters from The Grinch and Elf movies.