The Board of Commissioners of the City of Pharr met for a regular meeting on Monday, January 16, 2023, and considered an agenda that included the following highlights: 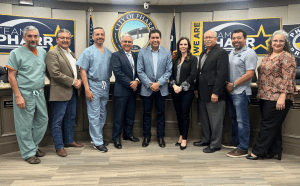 Mayor Ambrosio Hernandez, M.D., and the Pharr City Commission approved an ordinance appointing a Deputy City Attorney-Prosecutor for the Pharr Municipal Court. Pursuant to Section 45.201 of the Texas Code of Criminal Procedure, all prosecutions in a municipal court shall be conducted by the City Attorney of the Municipality or by a Deputy City Attorney. The appointment is non-assignable and in the event of the Prosecutor’s absence or unavailability, the City Attorney shall prosecute and/or make arrangements to handle court during the absence or unavailability of the Deputy City Attorney-Prosecutor. Ricardo Rodriguez Jr. of the Ricky Rod Law Group was appointed to the position. “Thank you for the opportunity to serve the City of Pharr and its citizens,” said Rodriguez. “I look forward to doing great things for the City of Pharr and Judge Villescas,” he added. 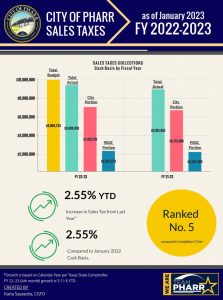 Interim City Manager Anali Alanis announced that the sales tax activity for the city of Pharr as of the month of January 2023 continues to show a positive upward trend, demonstrating a steady increase in sales activity. According to the report, the City of Pharr shows an increase of 2.55% year-to-date true growth compared to the same period last Year (2022) and 2.55% compared to last December 2022 Payments.

Mayor Ambrosio Hernandez, M.D., and the Pharr City Commission approved a resolution authorizing the City of Pharr to execute an Interlocal Agreement with the County of Hidalgo for the Scofflaw Program. This Interlocal Agreement is a renewal of a five-year Interlocal Agreement entered on February 6, 2018, between the City of Pharr and the County of Hidalgo to participate in the Hidalgo County Scofflaw Program. The term of the agreement will be for a period of five years (it is a three-year agreement with two one-year renewals with the same terms and conditions). Hamer Enterprises provides internet processing services for Hidalgo County. The scofflaw program has helped the City of Pharr potentially collect approximately $3.4M in outstanding citations. 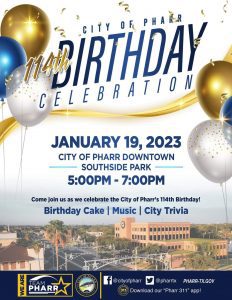 The City of Pharr is turning 114 years old this year and YOU ARE INVITED! Join the celebration on January 19th in Downtown Pharr from 5 pm – 7 pm!