The Board of Commissioners of the City of Pharr met for a regular meeting on Monday, July 1, 2019, and considered an agenda that included the following highlights:

Mayor Ambrosio Hernandez, M.D., and the Pharr City Commission received an update from City Engineer & Director Omar Anzaldua regarding the city’s drainage infrastructure improvements that are being conducted by the Hidalgo County Drainage District No. 1 as part of the 2018 Drainage Improvement Bond Program.

Mr. Anzaldua advised the commission that he has met with Hidalgo County Drainage District No. 1 to finalize the engineering part of the projects and was notified that the district will be releasing a timeline and schedule for the projects within the City of Pharr including status on design or construction and the timeline for completion. Mayor Hernandez reminded the commission and public that this is not a city project but a county project being handled entirely by the county and that a majority of the projects were designated to South Pharr, the area most impacted by flooding.

“The county has been working very hard on this project and is giving us updates as they progress,” stated Hernandez. “The county is responsible for these projects and we are working with them to ensure that they remain on schedule and on time,” he added. Mayor Hernandez further stated that the City of Pharr is committed to making additional improvements to the drainage system on top of what the county is doing to ensure that flooding is mitigated throughout the city, however, the final decision will be left up to the citizens of Pharr. “Pharr will not mandate a tax on our citizens, instead our plan is to put it up to a vote to our citizens,” Hernandez stated. “The county will only be able to complete certain projects as they do not have enough funding to fix our entire system, that is where we, as the citizens of Pharr, must step in and vote to invest and make the needed improvements that the county cannot make,” he continued.

The county is expected to begin the projects within the next few months and Mayor Hernandez noted that the City of Pharr would not be able to make any drainage improvements until the county has completed all their projects. Once the projects are complete, the city plans to ask voters to approve a tax increase for city-wide drainage improvements. Additionally, Mayor Hernandez announced that the city has been working with students from the Dual Language Architectural Design course at PSJA Southwest Early College High School to develop drainage solutions.

“These students have done a remarkable job in helping the city to develop drainage solutions,” said Mayor Hernandez. “We are thrilled about their proposals and will continue working with these outstanding visionaries to ensure that our community is able to implement their ideas when the time comes for the city to make our own drainage improvements,” he added. 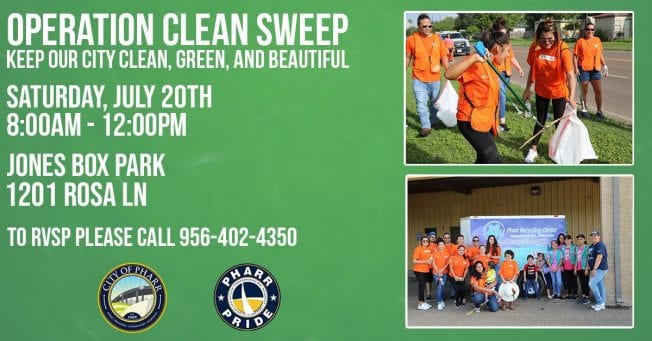