The Board of Commissioners of the City of Pharr met for a regular meeting on Monday, October 15, 2018 and considered agendas that included the following highlights: 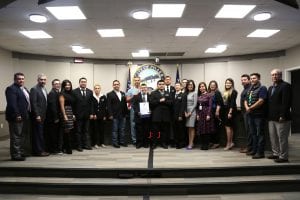 Mayor Ambrosio Hernandez, M.D. and City Commissioners approved a proclamation designating October as “Disability Employment Awareness Month,” a month focused on increasing the public’s awareness of the contributions and skills of American workers with disabilities. Veronica Quintana, Pathways Toward Independent Program Director at Pharr-San Juan-Alamo ISD accepted the proclamation, along with several students from the program.  “It is important that we work to connect our student with disabilities with jobs to help them continue to learn independence and employability skills,” she said while thanking city leaders for their support. “We are grateful for the support of the Texas Workforce Solutions, Pharr EDC and the city for their work in helping our students connect with businesses and employers,” she continued. 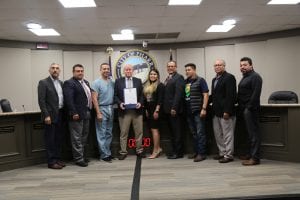 The Pharr City Commission approved a proclamation designating October 2018 as “Manufacturing Month” and October 3, 2018, as “Manufacturing Day” in Pharr. Manufacturers in Texas employ 6.9% of the workforce, an estimated 875,000 manufacturing employees, including 7,200 in Hidalgo County, 427 in Pharr, augmented by 52,800 in Hidalgo County and 1,800 in Pharr working in Transportation & Warehousing. Mike Willis, Executive Director of the South Texas Manufacturers Association announced during the acceptance of the proclamation that the South Texas Manufacturers Association and Pharr Economic Development Corporation, in coordination with the Pharr-San Juan-Alamo Independent School District, and South Texas College, held a Manufacturing Day Celebration on Wednesday, October 3, 2018, at the Pharr Development and Research Center. “We are working with our communities, partners, and businesses to educate our students about the importance of manufacturing jobs, skills, and there economic impact in our cities and region,” he said. “During the event, students had the opportunity to tour manufacturing plants, learn about careers in the manufacturing industry, and even visited the UTRGV Engineering Department,” he added. 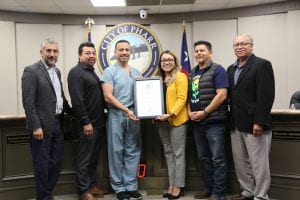