The Board of Commissioners of the City of Pharr met for a regular meeting on Thursday, February 7, 2019, and considered an agenda that included the following highlights: 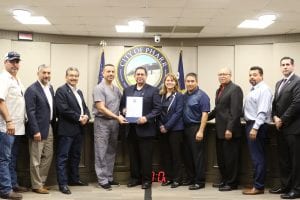 The Pharr City Commission approved a proclamation proclaiming the week of February 5-8, 2019, as Lunar New Year Festival and International Week.

The City of Pharr, the Pharr Economic Development Corporation, the Pharr-San Juan-Alamo Independent School District (PSJA ISD), and the University of Texas – Rio Grande Valley (UTRGV) are joining forces to host a joint celebration for the 2019 Lunar New Year Festival as part of the district’s Mandarin Chinese Program. The Chinese New Year is considered the most important holiday in China. The festival helps to further engage students understanding and knowledge of the Chinese culture.

“We are thankful to the city of Pharr for your partnership, resources, and support that you provided to make this event a success,” said Jennifer Burden, Dean of Instruction at PSJA ISD – Southwest Early College High School. “We were excited to receive a grant through the University of Texas Rio Grande Valley from the U.S. Department of Education to support undergraduate international studies and foreign languages, as a result, we have enjoyed weeklong workshops focusing on different countries and their cultures and look forward to ending our Multicultural/International Week with the celebration of the Lunar New Year Festival,” continued Burden. 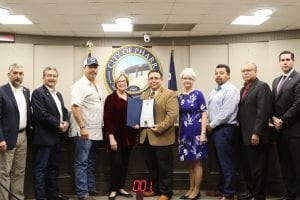 The center works to reduce the emotional trauma to child abuse victims, which supports the prevention of child abuse through community education and promotes the effective prosecution of those who perpetrate crimes against children. Jesus Sanchez, Executive Director, accepted the proclamation on behalf of the organization and stated, “We are often the first stop for children who have been suspected of abuse or neglect, our goal is to restore the lives of children through healing and justice. Last year we saw 1,618 abused children, 149 from the city of Pharr.” “We are thankful to the city of Pharr, the Pharr Police Department, and investigators for your continued support,” he said.

Sanchez announced that in order to raise awareness and funds for the organization, the Children’s Advocacy Center of Hidalgo County, is hosting their Annual Vinos Wine Extravaganza at the Embassy Suites McAllen Convention Center on Saturday, March 2, 2019 from 7:00 pm – 11:00 pm, featuring delicious food provided by local restaurants, fine wines and amazing entertainment by Premier Showband Satellite and The Renaissance Rockers