The City of Weslaco was originally granted authority for a General-Purpose Zone in the 1980’s. Earlier this year, the city submitted a request to reissue of the grant of authority to become part of the Hidalgo County Regional Foreign Trade Zone. The project was born out of discussions from several municipalities that had expressed an interest in joining forces to reap the benefits of the foreign trade zone designation under the auspices of one administrative entity. In the true spirit of regionalization and cooperation, the cities of Pharr, Weslaco, Donna, and Edinburg worked with Hidalgo County to establish the formation of the intercity partnership, the Hidalgo County Regional Foreign Trade Zone. 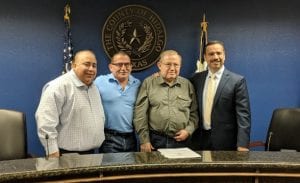 “International trade and commerce are vital to our national economy, and as leaders of border communities, we recognize the tremendous impact that our area can have, given the right tools, resources and opportunities for growth,” Mayor Hernandez stated. “By having the foresight to join forces and shift our focus to a regional perspective, we are taking the necessary steps for our communities to remain competitive in a global market,” he continued. “This Regional Foreign Trade Zone will provide numerous opportunities for economic development and investment in our communities, benefiting the entire region as a whole,” Hernandez added.

The Foreign Trade Zone (FTZ) Designation will streamline benefits for all companies which will endow them with the opportunity to compete on a level playing field with businesses throughout the nation in terms of decision making for production and investment. Additionally, the zone will promote activities involving domestic operations, facilitate and expedite trade, retain and create jobs, encourage investment, and boost international commerce. With this new foreign trade zone, the member communities will able to use the regional FTZ designation as an economic development tool within their respective cities while reaping the benefits of administration under the oversight of Hidalgo County.

Members of the Hidalgo County Regional Founding Board include: 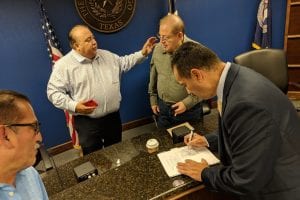 A United States Foreign Trade Zone is a secure, geographical area authorized by the federal government,  where commercial merchandise, both domestic and foreign, receives the same treatment by US Customs as if it were outside the commerce of the United States. Many firms use FTZs to defer the payment of duties and taxes, and in the case of re-export of cargo, avoid the applicable duties and taxes altogether as the merchandise was considered to have never entered the US consumption area. FTZs can be operated by both public and private entities.