The City of Pharr has successfully advocated and led the efforts for the passage of Senate Bill 2243 in the Texas Legislature, a bill that amends the Transportation Code by providing an exemption from commission approval for the reconstruction or improvement of existing bridges over the Rio Grande, including the Pharr International Bridge. Today, the bill was passed in the House of Representatives and is on its way to Governor Greg Abbott’s desk for signature. Both Senators Juan “Chuy” Hinojosa and Eddie Lucio, Jr. as well as State Representative Terry Canales worked with the City of Pharr to get the bill passed through their respective chambers. It should be noted that this bill was filed unprecedentedly late as an emergency bill in the Texas Senate and made its way to passage in a record time of 21 days. Particularly, Senator Hinojosa is responsible for taking the lead so quickly, ensuring the buy-in from Senate Committee on Transportation Chairman, TxDOT leadership, and the Lieutenant Governor’s Office. The bill would not have been possible without the support and advancement through the Texas House and the Transportation Committee without the hard work and dedication of Chairman Terry Canales. The City of Pharr is thankful for the support and dedication of our elected officials who lead the efforts to pass this important legislation.

“This is a true testament to our elected officials working together cohesively to get the job done in record time,” stated Mayor Dr. Ambrosio Hernandez.

A strong economic engine for the City of Pharr, the region, our state, and the nation, our local ports of entry and bridges along the Texas-Mexico border are key contributors to the economies of the U.S. and Mexico. Trade between Texas and Mexico has grown rapidly over the last two decades, increasing by 267 percent from $58 billion in 1994 to $213 billion in 2019. Our international bridges cannot afford to wait years for approval to enhance infrastructure as it would severely impact trading operations.

In the City of Pharr’s case, for example, they submitted an application for a Presidential Permit Amendment to the Department of State on September 30, 2020, and the White House issued the Presidential Permit on December 31, 2020. The Expansion Project was broadly supported by both the United States and Mexican federal governments and agencies. Typically, a permit process can take multiple years before approval; Pharr’s application was fast-tracked due to the dedicated efforts of city leaders and staff, consulting engineers Structural Engineering Associates, Inc., and others, who prioritized this project and worked diligently with U.S. and Mexican officials, despite the challenges of being in the midst of a global pandemic.  The Presidential Permit issued for the Expansion Project was only one of three approved by the White House, where two were private rail projects, in 2020 under new Executive Order 13867.

“The City of Pharr has been working on improvements and expansions at the Pharr International Bridge, which took years of planning, strategizing, and permitting to even begin the process,” said Hernandez. “Our bridge and city team worked together to get the expansion moving however, we soon realized that this process could be improved in terms of permitting processes at the state and federal levels, which further delay the process, are complicated, and can take years to receive approval,” he added. “We are appreciative to have reached out and received the help of Senator Hinojosa, Senator Lucio, and Transportation Chairman Canales as we aimed to make improvements to the state permitting process,” he continued.  “With their drive and determination for this bill, the South Texas Delegation came in strong for the additional support needed to cross the fast-approaching finish line,” stated Hernandez.

Senator Juan “Chuy” Hinojosa offered these remarks: “Our ports of entry are gateways to the Texas economy and supporting our international bridges has been one of my priorities this session. I authored SB 2243 to provide relief to the City of Pharr from having to obtain both a federal and state permit eliminating duplication, saving taxpayer funds, and expediting construction of the expansion of the Pharr bridge. I appreciate Mayor Ambrosio Hernandez for bringing this issue to our attention and to his staff for working with us to get this bill to the Governor’s desk.”

S.B. 2243 amends the Transportation Code to exempt a political subdivision authorized to construct or finance the construction of a bridge over the Rio Grande from the requirements to obtain approval from the Texas Transportation Commission and from the United States under federal law for the construction of the bridge and to submit to the commission a report that details the feasibility, location, economic effect, and environmental impact of the bridge and any other required information if the project meets the following criteria: the project is for the reconstruction, improvement, expansion, or maintenance of an existing bridge; and the project has received approval from the United States under federal law authorizing the project.

“By allowing an exemption for existing bridges, who have the permit and have already undergone the process, this will expedite the rate at which we can work on improvements, reconstruction, or construction at our current bridges,” stated Senator Eddie Lucio, Jr. “Overall, this will help us address infrastructure needs at our international bridges, so that we may keep up with the supply and demand of trade and continue to be a key leader in the movement of goods between the U.S. and Mexico,” added Senator Lucio. 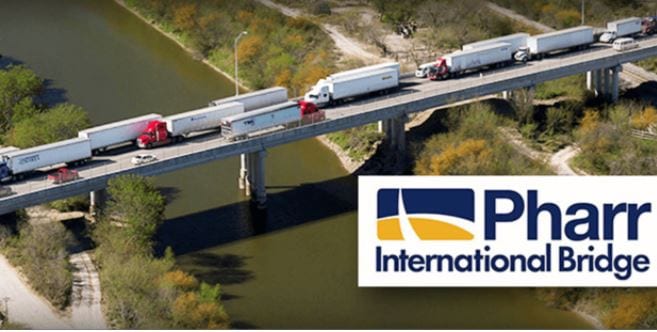 This legislation applies to expansions of existing international bridges as well as new bridges, and there is no provision that allows TxDOT to grant exemptions. This amendment to the statute will serve to align the state process with the new federal process and also spare both project sponsors and TxDOT the time, resources, and effort of processing State Permits for expansions of existing bridges. This amendment does not affect the project being subject to all other applicable laws and regulations.

“The expansion of the Pharr International Bridge is important to not only this City of Pharr, but also the entire region,” said Representative Canales. “Pharr’s port of entry is currently responsible for billions of dollars in trade that benefits our entire state’s economy, and expanding the Pharr International Bridge will only amplify these benefits for South Texas,” he added. Thank you to Mayor Ambrosio Hernandez, Senators “Chuy” Hinojosa and Eddie Lucio, Jr., and the Pharr City Council for working with our office to move this project forward, ensuring this economic expansion for our region,” he continued.

S.B. 2243 was one of three major bills that were filed in this legislative session that revolved around the Pharr International Bridge that sets precedent and paves the way for the future and neighboring ports of entry along the South Texas Border. The City of Pharr Government Relations Team led by Cynthia Garza-Reyes and Michael Vargas worked closely with the legislative staffers of the South Texas Legislative Delegation and corresponding Transportation Committees to ensure that these bills were successful in passage. All three bills will be signed into law by Governor Greg Abbott in the coming days.